The Weir Archer Academy will be based at the Kingsmeadow Athletics Stadium in Surrey, focusing on athletes from all Paralympic disciplines in south London.

They will also run training camps for UK youngsters and coaches. 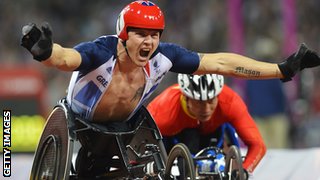 David Weir celebrates winning gold in the men’s 800m T54 final at the London 2012 Games
“There are literally thousands of potential athletes out there who are just waiting to be discovered and I want to help with that.

“I’m looking at the future and the Paralympics that are coming up because I want us to have a big squad in Rio [in 2016] and beyond.”

Archer, who worked as a fitness coach for Wimbledon FC for a decade from the late 1980s, added; “It’s something we’ve been talking about for the last two or three years and we really want to be able to give young kids the chance to try out the sport.

“From a wheelchair racer’s perspective it can be a really expensive sport with a chair costing between Â£2,500-Â£5,000 and the gloves are Â£100, so we want to have a selection of equipment readily available for young people to be able to come and try it out.”

The academy will be run as a charity so that athletes – many of whom who do not yet qualify for UK Sport funding – can attain financial support through commercial partners.

Those backers will also help cover the costs of training equipment, staffing, the redevelopment of the Kingsmeadow Stadium and transport for athletes and coaches who are based elsewhere in the country but make ad hoc appearances at the club.

Although all talented athletes regardless of their disability will be targeted, Weir admits he is keen to ensure a new generation of wheelchair racers are ready to come forward once he retires from the sport.

“We’ve done so well and had some great stars in this country with Tanni Grey Thompson, Shelley Woods, Micky Bushell and myself and I want to see the country staying strong with a new generation coming through,” explained the man dubbed the “Weirwolf”Â after winning four gold medals at last year’s Paralympics.

Weir, 33, is aiming to attend two sessions per week either coaching or mentoring young athletes, but he is far from finished with his own career.

The wheelchair racer will be bidding for a record-breaking seventh London Marathon title later this month before switching his attention to a possibleÂ Commonwealth Games debut competing for England in 2014.

“I’m not there every day as I have to do my own thing and train but when I am there I like to put my arm around them or give them a kick up the backside if they need it.”

The Weir Archer Academy already has 25 athletes signed up, including 18-year-old London Paralympian Jamie Carter – who is based three and a half hours away in Lincolnshire, and travels down once a month to receive expert tuition from his idol.

“There is a good atmosphere and there are big hopes for the academy so it is good to be a part of it,” said Carter, who hopes to have his travel costs covered through the new academy set-up.

“To watch what he [Weir] does in training is just amazing and he just gives you those extra little tips to help you get further in the sport. Jenny too, she’s like a mother and a best friend who knows how to get the best out of you.”

UK Athletics has its own programmes for recruiting youngsters and developing emerging talent, but Paralympic athletics head coach Paula Dunn believes the Weir Archer Academy will aid rather than conflict with existing initiatives.

“It’s going to be brilliant for the sport and we as a governing body love anyone who creates these opportunities,” Dunn told BBC Sport.

“It takes the load off us and it means that athletes in the London and southern region have got a facility and contact where they can get excellent support services.

“We will be working in tandem with that programme and making sure those with world class potential continue to move ahead.”

← Para-Rowing looking for new athletes
Tessier Ski, Sean Rose and Draft →
This site uses cookies to help make it more useful and reliable. By using the site or by dismissing this banner you are consenting to their use. Cookie PolicyOk